For the first time ever in the UK, more than 1,000,000 people were forced to turn to foodbanks in the last year to put meals on the table. In London alone the number exceeds 100,000 people, and in Brent the figure stands at nearly 2,000 -; of which over 600 are children. 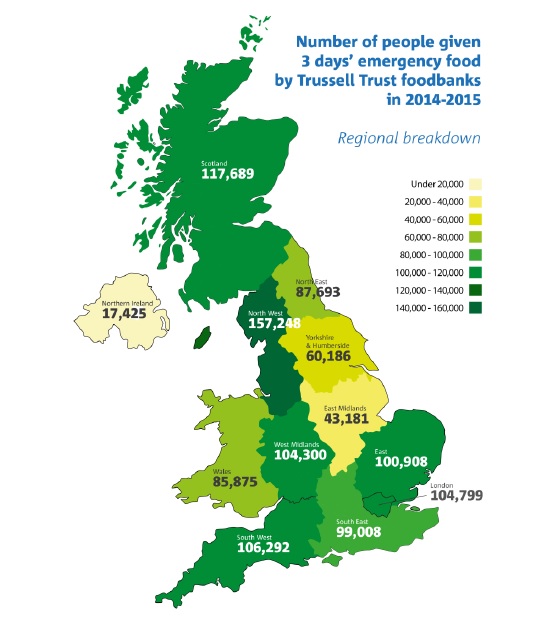 That’s according to figures recently release by the Trussell Trust, the UK’s biggest foodbank charity. The charity operates over 400 foodbanks throughout the country in partnership with churches and local communities. Last year the UK public donated 10,280 tonnes of food.

Since the Lib Dem-Tory coalition government came to power in 2010 the total number of Trussell Trust foodbanks in London has increased from 8 to 39.

The figures published show that 1,084,604 people – including nearly 400,000 children – have received at least three days’ emergency food from the charity’s foodbanks in the twelve months to 31 March 2015, more than in any previous year and an increase of 19 per cent on the previous year.

Whilst problems with benefits remain the largest driver of foodbank use, there has been an increase in numbers referred due to low income. Foodbank managers reported that clients who are in work are struggling with insecure work, low wages and high living costs.

Qualified teacher and mother of two, Susan, says: ‘I work part time as a teacher and my husband has an insecure agency contract. There are times when he doesn’t get enough hours of work, and we really struggle to afford food and pay the bills.’

Marcella, a former dental assistant who is recovering from a spinal operation, was helped by the foodbank recently: ‘It’s so hard to pay rent and survive at the moment. I have friends who are working minimum wage jobs who have had to go to foodbanks. The foodbank gave me faith that there are people who understand and who you can trust.’

Dr John Middleton, Vice President of Faculty of Public Health says: ‘UK poverty is already creating massive health issues for people today, and if we do not tackle the root causes of food poverty now we will see it affecting future generations too.’

Dawn Butler, Labour Candidate for Brent Central, said: “It’s a disgraceful indictment on the current government that over 1,000,000 people in Britain have no option other than to turn to foodbanks at a time when millionaires are being given tax breaks.”

She continued: “We must be eternally grateful to charities like the Trussell Trust for all they do to combat the problem; however, the onus should be on those running the country to ensure people do not find themselves in this situation. That is why Labour would tackle the cost of living crisis by banning zero hours contracts, raising the minimum wage and making housing more affordable.”